On the Cliff Walk, which starts near the Cliff House Hotel, Ardmore, Co. Waterford and continues along the cliffs for about 40 minutes, I found an amazing sight. It was, The Samson Crane. The first time I saw this is was like seeing a dinosaur. Firstly, because I was not expecting to see such a huge crane lodged in the cliffs but also because I was not aware this was even here. 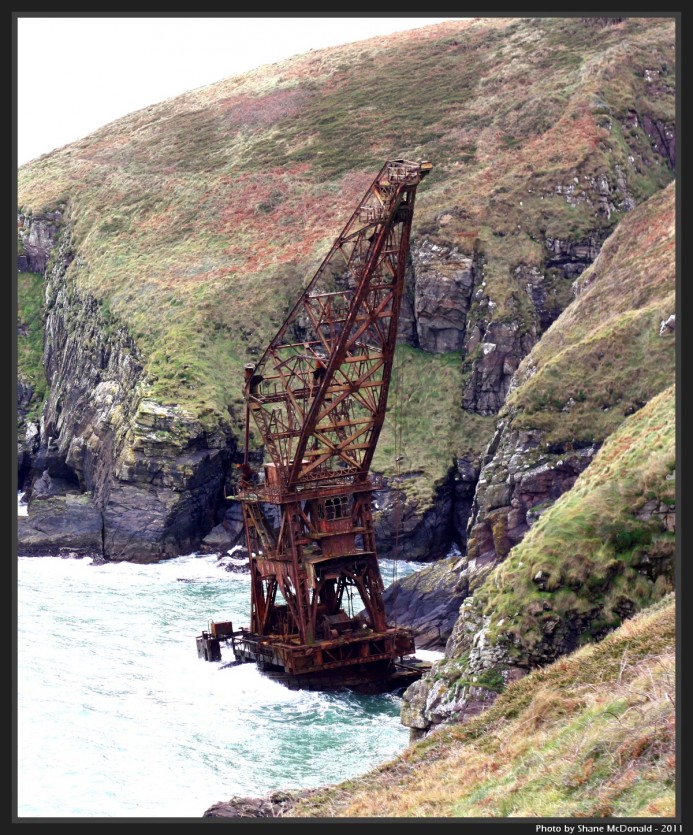 The Samson Crane was a floating crane-ship which was under tow from Liverpool to Valetta, Malta and on 11th December just off the Welsh coast, the towline snapped in a force 6 to 7 south easterly gale. This huge crane ship ended up on the rocks at Ardmore near Rams Head on 12th December around 8am.

The two crewmen on board the ill fated crane barge were rescued by an RAF Sea King helicopter sent from Brawdy in Wales. At the time we had no Rescue 117 at Waterford so we had to hire-in some air support.

The Samson Floating Crane makes an impressive sight as you walk along the cliff. It is almost an eerie sight as it is so out of place with what you would expect to see. The now rusting shell of this impressive feat of engineering seems doomed to rust and eventually fall into the sea.

If you want to see the crane yourself, you can start the Ardmore looped cliff walk from the Cliff House Hotel. The trail is easy to find, but can be slippy/muddy in bad weather, so good footwear is a good idea. The Samson can be found about 40 minutes into this cliff walk.