I was hoping the International Space Station would track directly over the new Waterford Bridge and had set up my camera at around 10pm with the ISS pass scheduled for 10:05pm over Waterford. I could see the ISS coming and took 2 quick shots of the bridge to check focus and light levels. Unfortunately as the ISS passed over head it was obvious the Space Station would track more Easterly than the South East track required to get it over the bridge. (Actually had I been on the other side of the river near Carriganore it ight have worked).

The resultant shot of the International Space Station over Waterford is shown below. 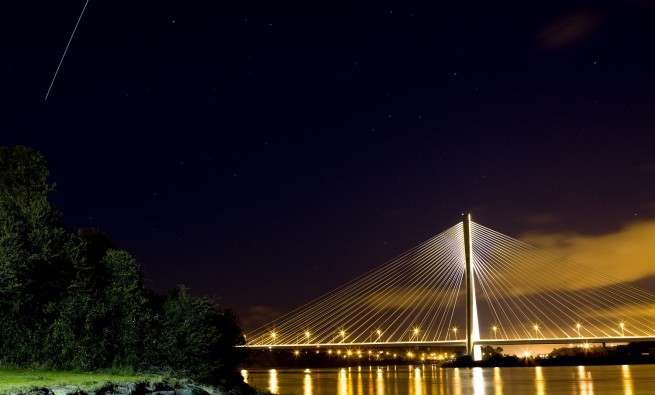 The nasty bush doesn’t add much so perhaps next time I might try a different location or even one back towards Granny Castle. In the 15 seconds the ISS traveled through the sky you can see the star-trails starting to occur (not sure if this is evident on the reduced, web version). Perhaps the next shot might be the bridge and star trails – however I suspect light pollution from Waterford City might ruin that.